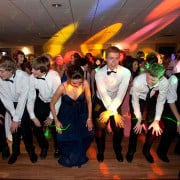 Having a great teen birthday party consists of three important things – good music, lots of food, and entertainment. Most of the teens enjoy spending their birthday with their friends, dancing, having fun, and enjoying their favourite foods and drinks. Therefore, in order to make a great teen birthday party for your child, you should do some careful planning, however be careful not to make it too tedious. Teens won’t be very pleased if you offer them some kind of games that kids and pre-teens would enjoy. On the other hand, if you decide to hire a St Louis DJ for the birthday party, you might be surprised by the positive reactions.

The way that the guests are invited does not really matter. The teenager himself/herself might simply call their friends and give them a heads up, or if you want something more interesting, you could print out cards and distribute them. In addition, this way you would discourage and unwanted guests from coming. However, make sure that the cards have been made with a more mature and appropriate layout.

A good idea would be to make the themes for the birthday party more lively and enjoyable depending on the age of the invitees. Teen birthday parties can also be celebrated in the outdoors. Most of the girls at this age prefer to have their birthday held somewhere other than their home. One of the most famous types of parties would be the salon party, where girls of this age can undergo a transformation while they are celebrating. So, a good idea might be to take them to one newly opened salon and let them have a good time there.

Other good ideas for celebrating the teen’s birthday party would be in a restaurant or a club. If you want to hire a disc jockey, the best approach would be to perhaps celebrate it in a local club. This way the party DJ would have an easier time setting up their equipment, and would have much more freedom to show off their skills.

In many western countries the sweet sixteen birthday party is one of the biggest events that a person has during their teenage years. Make sure that you hire a good and experienced St Louis DJ that will be able to do a great performance which your teenager would appreciate.

Whether it is an intimate celebration or a big and open birthday party, food is always adored. Making sure that all of the guests have a sufficient amount of food and drinks is one of the most important aspects when you are organizing a party. Some of the most beloved foods by teenagers include chips, sandwiches, and candy. You should also consider making sure that they have sufficient amount of drinks such as Coca Cola, Pepsi, or other similar products.

The thing that makes up the biggest part of a birthday party is the gifts.

Consider some of the things that your teenager might want to have as a present and perhaps buy it for them. Another good idea is, instead of you buying it, to hint to their friends about what your child wants so that they can combine their efforts and get it for them. In the end, the most important thing is not to buy something that is expensive and modern but rather something that would leave a mark in their memory, something that they would find useful for many years to come.

In the end, you should let your teenager decide whether or not they agree with you organizing a party for their birthday. If they dislike the idea, then let them have it their way, perhaps they would enjoy it more when they are in charge. Many teens love their birthdays and dream about them for days, which is why you should make sure that they get everything the way they wanted it. There are many ways that you can make the event even more memorable, such as for example having a St Louis DJ invited.

Remember that in the end the main goal of the whole party is that your teenager has a good time and enjoys their birthday, which is why you should try to meet their desires.

What do you think? Leave your comments below.

How To Pick The Right Venue For Your Wedding Reception