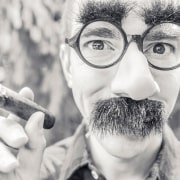 Wedding are great and fun but they can also be weird sometime. Have you ever heard of the groom shoe hiding tradition? It may seem like a weird thing to you but it is actually quite common in the country where it is practiced and that is India in case you are wondering. The world we live in is full of crazy and weird things. The wedding tradition that you practice will be weird for other people. So here are some weird wedding traditions from around the world that will make you scratch your head in confusion.

It is not what you think it is. It is a tradition in France where all the friends and family members of the newly wedded couple gather outside their home and start banging on utensils like pots and pans. They start banging and continue to do so until the groom and bride serve everyone some drinks and snacks. It is a very ancient tradition and is called Charivari.

Now this is a very weird tradition that is practiced in the land of the Vikings, Scotland. Weird and gross stuff like sauce and fish is thrown on the bride. The bride is first tied up and the people take turns throwing stuff on her. After that the bride takes the much needed bath and then goes for a night out with her friends. The reason behind is that if the bride can handle this, she can handle every other tough situation after marriage.

This tradition practiced in Mauritania makes brides eat more and get healthier. They believe that the fatter the bride is the more good luck it will bring. The bride starts eating food that promotes weight gain. There are special fat farms where the bride goes for the sole purpose of gaining weight. This is a quite harmful tradition as many brides can get sick and have other health complications.

It is not like the world is running out of men. In India, there is a tradition that woman who is born as Manliks (when the planets Mars and Saturn are under the 7th house in astrology) are cursed and whoever man they marry will die. So in order to break this curse, they will have to marry a tree first. Then after that they can marry the man they wish to. Honestly, in this modern world where women are all set the rule the world, who needs a man?

So in a land far away, well it isn’t that far. It is actually China. A group of people called Tujia practice a tradition where the bride cries for an hour for one month straight. The bride isn’t alone in it. Other female members also join her in the one hour crying session. People actually cry when something bad happens but the Chinese believe that this tradition will welcome a happy marriage.

This tradition is exactly what it sounds like. A tradition in Germany where the couple’s friends make a huge mess by smashing porcelain plates on the ground. Although the people of Germany are quite famous for their cleanliness but this specific tradition is not clean at all. They will all gather and start smashing plates and make a huge mess and the then poor couple will clean up everything. These traditions supposedly give the couple the strength to clean up all types of messy situation after getting married.